Who is Alan Davies? 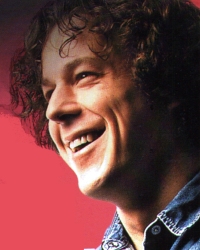 Alan Davies is one of the UK most successful comedians and has recently finished a UK tour. Better known for his stand up routines, Jonathan Creek is Alan's second television series.

Born in Essex in the UK, Alan had a rather tragic childhood as his mother sadly passed away when he was just six years old. Such a tradegy made him slighty withdrawn, and open to bullying. However he has overcome all this to become a brilliant comedian and actor.

In 1994 Alan was nominated for the Perrier Award, and in 1995 he won the Edinburgh Festival's Critical Award for his stand up routine. He was also nominted for the Best Stand Up Comedian award at the British Comedy Awards.

For more information on what Alan has done, please visit his Internet Movie Database entry.

Alan has toured the UK as well as Australia, New Zeland, America and Canada with his one man show.

For more information on what Alan's doing these days you can contact his agent on the address above.

Some of Alan's work is available to buy on cassette, DVD and video. Please visit the merchandise page for more details.