Articles > Extra extra, Creek all about it

It's 5am on the 5th July and my alarm clock goes off. Not that it needs to, I've hardly slept due to the excitement. You see, today is the day I will be an extra on the set of Jonathan Creek, and I can't wait.

By 6am I am waiting in the lobby of the Thistle hotel in Brighton for a man called Rad Neville who is the second assistant director. He has kindly agreed to ferry me to the set this morning. Rad's not quite what I was expecting, he's younger and has the most gorgeous accent. We go down to the car park to begin the 45 minute journey to the location where Jonathan Creek is filming today.

Much to my delight, filming is at the Shipley Mill in West Sussex, the home of Jonathan Creek. Sadly the weather is misty, and from the adjoining field it's hard to make out the windmill at all, but see it I do. It's considerably shorter and thinner than I was expecting. There is a key to the door somewhere but neither Rad or I can find it.

The adjoining field is quickly filling up with people. A catering van is making breakfast for the cast and crew and I help myself to some toast and marmite. Everything is in industrial size portions, and the tub of marmite looks like it could feed a third world country on its own!

As I eat my toast I spot David Renwick and without really thinking I go over to him and say "You came, you came!" The last time I spoke to David, he wasn't sure he would be down on set today, so it's a great surprise to see him. I now have a permanent smile on my face and must look like a prize idiot, but if he notices, he doesn't say anything.

Alan Davies then joins us, and much to my delight, he remember me. We chat for a while, and then Alan has to go off to makeup before filming starts.

David offers to give me a tour round the inside of the windmill once we can find the key. It was there all along. Rad and I were just looking in the wrong place! The inside is amazing: everything is put in by John Asbridge, including all the kitchen cupboards! The bedroom is on the second floor, and his living room is on the third. Like the outside, the windmill looks smaller on the inside. There's a great view from the balcony. Sadly I can't see much of it due to the mist, but I'm sure it's there.

Afterwards I take time to chat to a few of the other extra who have now turned up on site. One is an aspiring stand-up comedian, another has been an extra for over 20 years.

They are all lovely people and my nerves about being on set seem to ebb slightly. THis, however, does make me the most star struck person on site. Everyone else has worked with famous people all the time and the novelty seems to have worn off. For them, it's just a job.

Soon the first scene is being rehearsed by the side of the catering van. The basic premise is that a costume drama is being filmed at the windmill. Therefore there are two catering vans and coaches for the extras. The scene involves Maddy and JOnathan talking to a member of the film crew called Heidi, played by Rebecca Front (more well known for her roles in The Day Today and Absolutely Fabulous). The scene goes well, and I find it hard not to laugh. Apparently, earlier in the episode, a rather risque picture of Jonathan was taken and has been doing the rounds amongst the crew. Needless to say Maddy wants to see the picture, but Jonathan won't let her.

Then I'm called up for my first scene. I'm to be part of a queue to a catering van while Maddy and Heidi have a chat. We have a quick rehearsal and then we go for a take. The dialogue they speak doesn't really make sense to me as I don't know the context, and it's a quick scene anyway. My main problem is remembering that I have to mime speaking to the other extras when the main characters are talking! It's harder to do than it sounds when you don't do it for a living!

The earlier scene, which I saw being rehearsed, is then shot for real. I sit down next to David and watch it. I keep quiet as I don't want to disturb the take or anyone in the crew. In between takes, David has a quick chat with me, and then, much to my surprise, he calls Caroline over to introduce me. I suddenly freeze, but she's lovely and quips. "Are you bored yet?" I forget what my reply was, but I'm sure it was something suitably stupid. I've never met Caroline before now, so I'm still at the star struck stage with her. I relax slightly, but she soon moves away to get ready for another scene. It takes me a while to realise she's pregnant, as it doesn't show at all. It will be a while before they have to change the way they shoot her scenes. There are the classic tricks, like shooting from the waist up or simply hiding her behind chairs, etc.

A quick rain shower comes which stops play. Most people retire to shelter to wait it out. I go to the "extras" coach where I join in a game of scrabble. Sadly, I have very few vowels and the best word I can come up with is "tree"!

The shower soon passes and I'm called upon to take part ina second scene. The action actually takes place on a coach where Maddy and Jonathan are having lunch, but I'm outside once again at the catering van. I'm there merely as a reflection in the coach windows, along with some other extras, while the main action takes place on the coach. Some of the extras I'm with this time are actually some of the Jonathan Creek crew who are filling in as themselves for the day. The scene seems to take forever, and I can't turn around to see what's going on as my reflection would give me away. Later David tells me this is a good thing, as the dialogue was fairly pivotal to the plot and would have given things away he didn't want me to know just yet - Doh!

We break for lunch and, much to my surprise, there is quite a choice of food and the quality is superb! I decided on the liver and bacon which his delicious.

By now it's mid day and the mist has cleared up nicely. Unfortunately for me it's now very hot, and I'm glad I slapped on the factor 60 sun screen this morning. The coach becomes like an oven, so I escape outside and sit in a small bit of shade. Once again I manage to catch a few words with David, who informs me the crew are now setting up outside the windmill for the afternoon shoot. I can't wait, as Alan has to get into costume, complete with wig for these scenes.

I spot Verity Lambert for the first time now, but I don't know how long she'd been onset. She's the producer for the series and is the one who arranged for me to be here today. I go up and say thanks, while she's talking to David. David then has us both in fits of laughter as he explains about a problem he had with a lawn mower. He's debating whether to write it up as an episode of "One foot in the grave". Both Verity and I suggest he should, it sounds hysterical.

Outside the windmill there is a small water well which is no longer used. It has a lovely thatched roof and a horse is now attached to it. It's a gorgeous animal but I fear the poor thing must be sweating like a pig in this heat.

Before filming starts, the nurse comes round asking if anyone wants sun screen. The first assistant director also starts insisting people drink the water that's being handed out to stop us all dehydrating.

This scene, although fairly short, takes all afternoon to do as it's broken down into four main pieces. Once again I'm in shot but I doubt that anyone will see much of me. The first assistant director says if you can see the camera then it can see you. Like the miming of talking I did earlier, I have to remember not to look at the camera, but at the well where Jonathan and another guest extra would be standing. These are the closing scenes for the episode which, I've since learnt, is the second episode for the new series. David lets me have the episode title for this episode, but won't tell me any of the other five. This one is called "The Eyes of Tiresias" - which doesn't give anything away!

David asks if there is anything else I'd like to know before I go home. I can think of fifty questions, but sadly he would rather wait to give me the answers. I think he then takes pity on me and tells me that Adam Klaus will be in episodes one, four and six.

I ask if I can get a picture with Caroline, Alan, David, Keith Washington (the director) and Verity. Caroline has gone back to her trailer already and I'd feel a right groupie knocking on her door to ask for a picture. My camera's been playing up all day, so I'm praying the picture comes out.

A few days later I get my film developed, only to find that hardly any of the picture have come out. I'm gutted, but I do have a few and I have some great memories, so I can't really complain.

One things for sure I can't wait to see the new series now! 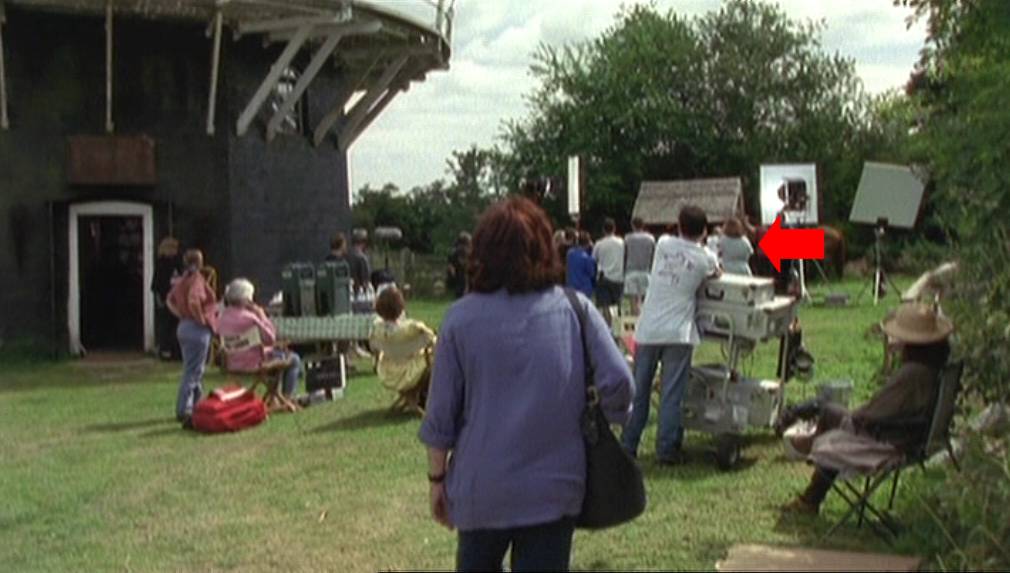 In the above picture you can see Liane - well the back of her anyway! The red arrow points her out.