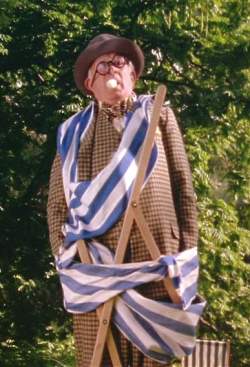 Jack Holiday is a veteran comedian whose career has taken a nose dive. He has been reduced to doing adverts and his latest isn't funny. Then news about Alan Rokesmith comes through. Alan was convicted of killing Jack's first wife, and has been in prison for nine years. With the help of Madeline Magellan and his sister, Alan has been released from prison early. Needless to say Jack is not best pleased.

When Jack's new wife (Kirsten) comes home and finds him missing, she calls in the police. They discover Jack's body in an old disused nuclear bunker which has been locked from the inside. It appears to be suicide, Jack having shot himself in the head. However as Jack had crippling arthritis and couldn't un-peel a banana let alone shoot himself, Kirsten is convinced it was murder. But how could a murderer have gotten out of the room..?

Jonathan Creek receives a phone call from Maddy, and as Adam's show isn't on, he agrees to meet her the following morning, and they go for a drive down the coast. Jonathan admits that he kept trying to phone Maddy, but kept putting the phone down. He didn't want to get involved in another one of her "grisly murder investigations", and at Maddy's nervous laugh, he demands she stops the car. He gets out, but after realising that he's miles from anywhere agrees to go along. 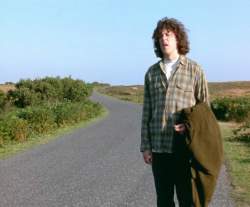 Maddy explains that Alan Rokesmith was found unwrapping a cord from around Jack Holiday's first wife, and accused of her murder. Circumstantial evidence (she says!), he was talking to a prostitute when he heard a scream from a nearby street and was unwrapping the cord in a vain attempt to save her life. Maddy has an interest in Jack Holiday's death, as Kirsten has written a nasty letter to her, blaming Maddy for Jack's death, as she helped release Rokesmith whom she believes killed her husband (got that?!). So in order to be sure that Jack committed suicide, Maddy has roped Jonathan in to make sure there was no other explanation! (you sure you got that!?)

Maddy has previously phoned ahead and told Kirsten that Jonathan is an inventor of magic tricks and would like to offer his services. She has agreed, and while Jonathan has a look around the house Maddy is off to talk to the builders of the nuclear bunker. While she discovers that there is definitely no other way out of the bunker, Jonathan confirms that it would be impossible for the murderer to leave the room. Madeline is now more convinced than ever that it was suicide, however Jonathan has come to exactly the opposite conclusion. There is a hole where the toilet was going to go and it won't stop bugging him.

On the drive back, Madeline checks the messages on her answer phone and discovers one from Rokesmith asking her to call him ASAP. In order to keep her eyes on the road, Jonathan takes her mobile phone and dials Rokesmith number, but there is no reply. Madeline then remembers that Rokesmith has gone away for the week on a holiday to "relish his freedom".

Madeline then pays a visit to the man behind Jack's latest advert. She finds that Jack had to use stunt double to peel the bananas, as his arthritis was that bad, confirming that he couldn't have shot himself. Madeline now believes Jonathan and Kirsten's theory that he was murdered, but how?

Meanwhile Rokesmith's sister Rachel goes to visit her brother. All she finds is an empty house with his diary. The last entry is dated the day before. The police then arrive and tell her the boat Rokesmith hired has been found wrecked. Rachel tells Madeline, who asks if she has managed to route out some old letters Rokesmith received. Three of which are from a company confirming his order of fudge, something which Rokesmith hated.

Jonathan and Madeline return to the scene of the crime, and have a walk along the cliff side to think. Jonathan asks to see Rokesmith's letters again, and Maddy empties out half her bag to get them. Jonathan has a quick look at them, and then suggests they leave. He's absolutely convinced that Jack was murdered, he just doesn't know how. On their way back to the car, it starts to rain heavily. He then suggests a theory which might help explain things:-

"Suppose someone had a reason to killed Jack and Jennifer Holiday in the first place. They set up a load of death threats to make it look like a crank killing. Jennifer ends up strangled in an alley way, Alan Rokesmith just happens to be around at the time, goes to jail accused of the murder. The real killer's got away with it. Nine years later Rokesmith's released, now's their chance to kill Jack Holiday, and everyone will think it's Rokesmith again. And just to make sure Rokesmith's not around to clear himself, or come up with any alibi he's disposed of as well..." 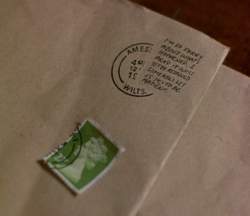 They make it to Maddy's car, but she's (conveniently!) lost her car keys. Thus Jonathan and Maddy have to stay overnight in a local inn. Over dinner, they discuss the murder again. Jonathan learns a bit more about Rokesmith, and then discovers why Rokesmith kept the letters about the fudge. It has nothing to do with the actual letters, it's the envelopes that hold the key. What's the best way of writing to someone in jail, without the prison officers seeing what's being said? Writing under the stamp! Simply steam off the stamp to reveal the message and then replace the stamp. However when Rokesmith replaced the stamps, he didn't line them up properly, and so the franking marks don't match.

Upstairs in their room, they steam off the stamps, to reveal some messages.

"I'm so sorry about what has happened, I pray it will yet be resolved somehow. We must try to be patient."

"I know things are looking bad right now, but if the truth comes out it would be the end of everything. Don't give up hope."

"These are dark times, I appreciate your silence, and I'll stand by my pledge to you come what may." 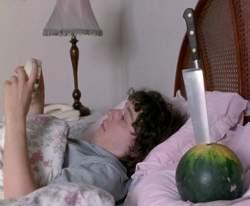 After this they go to sleep, but neither of them gets much! Personally I think they are both sexually frustrated, but neither is willing to make the first move! However in the middle of the night someone appears to climb into bed with Jonathan, thinking it's Maddy he doesn't do anything to stop them. Although it's not until he wakes up that he finds someone has put a melon with a knife in it on the pillow! There is a note under the melon, saying, "Back Off".

Jonathan then pops down the hall to the bathroom and sees the toilet, when Maddy says "....someone who's worried we're getting too close to the truth." It then all clicks into place for Jonathan, and he knows how Jack was murdered!

They then proceed to the nuclear bunker in order to carry out an experiment. Jonathan changes the light bulb from the 40 Watt to the 100 Watt bulb, and then proceeds to explain all....

However to understand how it was done you have to understand the motive. Once Rokesmith was released it brought back the whole question of who killed Jennifer Holiday and why. It's now clear it was Jack Holiday himself. He paid Rokesmith to kill his wife for him, and flew out of the country to give himself an alibi. Kirsten doesn't believe a word of it, but Jack's closest friend Oliver confirms the story. This still doesn't explain how the killer got away. 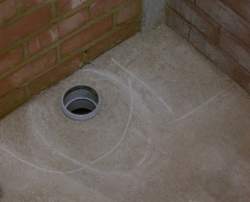 However, if he never planned to get away it all starts to make sense! The light bulb, and the toilet hold the key. Several days before the murder, Rokesmith came down to the bunker and began to systematically dismantle the back brick wall. He then re-builds it a few inches in from the back block of concrete, leaving an opening that he can get through. He then returns with Jack, kills him, and places the gun in Jack's hand to make it look like suicide. He then swallows some pills and before they can take effect, he seals himself in by finishing rebuilding the brick wall.

Jonathan proves this, by looking at the hole where the toilet was going to go. The hole is so close to the brick wall that there is no room for the cistern. However if the toilet was supposed to go against the side wall, then there's room for the cistern. Only now there's a wall in the way of where the bowl of the toilet would go. The fact that the brick work looks a bit different wouldn't show, as Rokesmith changed the light bulb to make the light dimmer. They then break through the wall, and find Rokesmith's body.